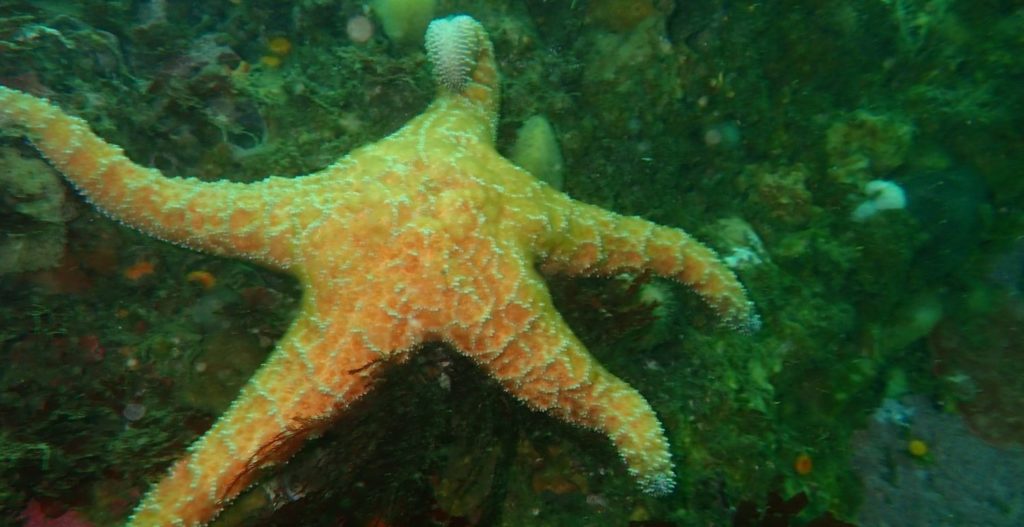 Every year, we elect an animal to be the honoree of the year. We have been educating our community about the dolphins, sea otters, turtles etc, for the past few years. We are happy to have selected the sea stars for 2018. Below you will find common information about this incredible marine animal.

Sea stars belong to a group of animals that call Echinoderms. Although they are commonly called starfish, these animals aren’t fish, which is why they are more commonly referred to 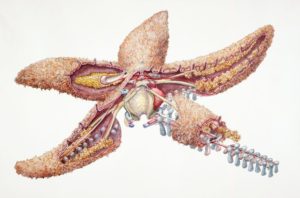 Sea stars have hard outer skin with many short spines or bumps (ossicles) on the top part of the animal. Sea stars are echinoderms, which means they are related to sea urchins, sand dollars, basket stars, brittle stars, and sea cucumbers. All echinoderms have a calcareous skeleton covered with skin. They have tube feet that are used to catch prey and move around. The coloration of sea stars varies between species as well as the body form.

Here are some great fun facts about the sea star!

Sea stars have a combination of physical and behavioral protection strategies. They have hard outer bodies the can withstand most attacks. They can cling to rocks and other substrate using their strong tube feed to withstand predation from sea gulls and sea otters.

The madreporite is made of calcium carbonate and is covered in pores. The water brought into the madreporite flows into a ring canal, which surrounds the sea star’s central disk. From there, it moves into radial canals in the sea star’s arms and then into its tube feet.

Sea stars are characterized by having hundreds of tube feet. These tube feet are used for 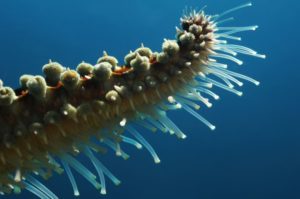 locomotion and feeding. Some sea stars like the Ochre have small eye spots on the tips of their arms. These simple eyes can distinguish between light and dark and may be used to determine shady locations and time of days. Several sea stars have multiple stomachs that can be extended into their prey animals.

Sea stars don’t have a circulatory system like we do. They have a water vascular system. This is a system of canals in which seawater, instead of blood, circulates throughout the sea star’s body. Water is drawn into the sea star’s body through the madreporite.

The seawater that sea stars need to survive is brought into their body via a small bony plate called a madreporite, or sieve plate. Water can go both in and out through this part.

Did you know that sea stars have eyes? These are very simple eyes, but they’re there. These eye spots are located on the tip of each arm. They can sense light and dark, but not details. If you are able to hold a sea star, look for its eye spot. It is usually a dark spot at the very tip of the arm.

Ochre sea stars can live for over 20 years in the right conditions. The adults periodically release eggs and sperm into the ocean where fertilization takes place. The juvenile sea stars spend several weeks in the open ocean before settling on a rock or other substrate. The juveniles then transform into the adult form and begin to grow.

Its Threats, the Wasting Decease 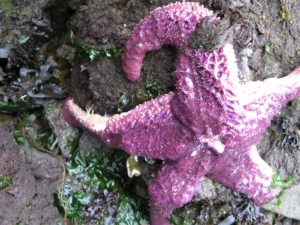 Sea star wasting syndrome is a general description of a set of symptoms that are found in sea stars.  Typically, lesions appear in the ectoderm followed by decay of tissue surrounding the lesions, which leads to eventual fragmentation of the body and death.  A deflated appearance can precede other morphological signs of the disease.  All of these symptoms are also associated with ordinary attributes of unhealthy stars and can arise when an individual is stranded too high in the intertidal zone (for example) and simply desiccates.  “True” wasting disease will be present in individuals that are found in suitable habitat, often in the midst of other individuals that might also be affected.  The progression of wasting disease can be rapid, leading to death within a few days, and its effects can be devastating on sea star populations. The proximal cause of the disease, when pathological studies have been done, is typically a bacterium (vibrio), although a recent wasting event on the east coast of the United States has been attributed to a virus.

The current bout of this wasting syndrome was first noted in ochre stars (Pisaster ochraceus) in June 2013 along the coast of Washington state during monitoring surveys conducted by MARINe researchers from Olympic National Park (ONP).

Other Resources To Learn More