Every year, the Pacific Beach Coalition recognizes the contributions made by our thousands of Earth Heroes during Earth Day of Action. Volunteers receive a personalized “Star of the Sea Award” for taking action to protect and preserve our coastal environment. We also recognize the dedication of one special Earth Hero who receives the Cedric Collett Unsung Earth Hero Award. 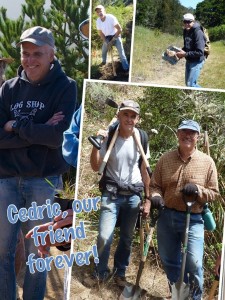 In 2014, the year the Pacific Beach Coalition achieved a milestone by marking the 10th Anniversary of Earth Day of Action, we formally established our annual “Unsung Earth Hero Award” in the memory of Cedric Collett – one of the most beloved, inspiring, genuine and committed members of our Earth Hero team who, for more than eight years, exemplified unwavering dedication to the preservation of Pacifica’s coastal habitat through his trademark caring spirit and eagerness to take on daunting projects and the ‘heavy lifting,’ and his innumerable daily cleanup actions that made a significant mark on Mother Earth through his devotion to our community and environment in Pacifica.

Every April, the Unsung Earth Hero Award is given to a recipient who demonstrates Cedric’s traits as a devoted environmentalist, and a willingness to share time, talent, knowledge, insight and wisdom on behalf of our environment and ocean. 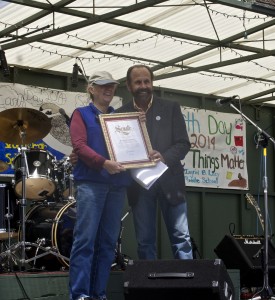 In 2014, Pacifican Kathy Kellerman was our first Unsung Earth Hero Cedric Collett Award recipient because of her steadfast long‐standing devotion to preserving the native habitats and biodiversity of our coastal landscape to protect wildlife, our ocean and our beaches through her tireless collection, propagation and nurturing of native coastal plants from ‘seed to sand and land’ during monthly hands‐on habitat restoration events throughout Pacifica at Linda Mar Beach, Pedro Point Headlands, and Rockaway’s switchbacks; and for her on‐going contributions to educating youth at Ocean Shore School, and to the beautification of Pacifica’s Community Center.

In 2013, in partnership with Pacifica Land Trust, we recognized the contributions of Mitch Reid with the opening of the Tom Lantos Tunnels.

2015, Tom Webber for becoming the PBC’s 2015 Unsung Cedric Collet Earth Hero Award recipient because of his long-standing devotion to leading and guiding the youth of the 4-H Million Trees project since its inception in 2008. For tirelessly coaching the youth to write grants, make presentations, promote the planting of trees worldwide, and achieving the planting of the One Millionth Tree in August of 2014 and now pursing 4H Million trees
2.0. For his continued support of the PBC. For bringing the Cox Conserve Hero Award to Lynn Adams and for suggesting the successful trash bucket challenge ; and for his on-going contributions to educating and empowering youth.

2016, Jean Bartlett – PBC’s 2016 Unsung Hero award winner for sharing all of PBC’s stories and the wonderful stories of Pacifica and making them interesting, fun, and influential to all, and for connecting our community thru her work, making it such a better place.

2017, Ian Butler – PBC’s 2017 Unsung Hero award winner for all of his work to help the environment and community of Pacifica, for adopting and calling attention to the Secret Waterfall since 2007, for helping Pacificans find common ground to solve challenging issues, for raising awareness and providing a forum through his PCT shows, and for being an invaluable member of PBC and PEF.

2018, Larry Wuerstle – Many of us are familiar with the path that runs from Crespi Drive to Rockaway Beach, but did you know that Larry began, on his own, maintaining the bike path in 1995?  He saw an opportunity to make Pacifica a better place and he jumped right in by pulling the weeds, trimming back the brush, sweeping the sidewalk, steps and crosswalk area, clearing the drainage and shoveling sand from the trail every week without fail.  You’ll see him out here every Saturday and Sunday, and often during the week!  Twenty-three years later he is still at it and when he has time, you will still find him sweeping the trail all the way to Rockaway and
clearing the bushes and trail at the Quarry as well!  Larry embodies the spirit that Cedric brought every day – he quietly and consistently works hard on his own to make Pacifica a more beautiful and safer place which truly qualifies him as our Unsung Hero.

2019, Russ Hartman embodies the spirit that Cedric brought every day – he
quietly and consistently works hard on his own to make Pacifica a more beautiful place which truly qualifies him as our Unsung Hero. For years, Russ single-handedly eradicated the large patches of invasive pampas grass along Hwy One and has since patrolled the Coastal Trail from Linda Mar to Rockaway to remove invasive weeds to protect the native plants that they will overtake.  Additionally, Russ contributes to our Corporate Give Back Program by assisting with the habitat restorations whenever he is available.

2020, Greg Cochran for his continued commitment, collaborative spirit and extraordinary support of the Pacifica Beach Coalition. For leading the charge for the Annual Surf Movie fundraiser; as well as his tireless efforts to help Pacifica be a better community, by serving as ambassador, board member, commissioner, and president of many organizations! Whether in the water or on the shore, we commend Greg as the Big Kahuna of the Aloha Spirit making all of our organizations better!

It is our dream to create a scholarship fund to award to young Earth Heroes so they may attend ocean-related and/or environmental education programs in the future.

If you would like to make a donor-directed contribution to the “Unsung Earth Hero Award” in the memory of Cedric Collett, please contact us directly for more information.

Picture above, courtesy of Pacifica Riptide