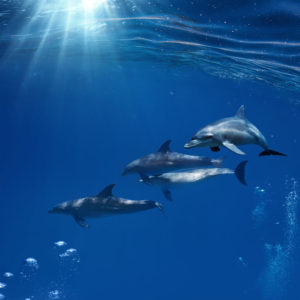 Pacific dolphins swim in formation with other dolphins and sea lions, sometimes leaping from the water in spirited somersaults. Source.

The Risso’s dolphin lacks teeth in the upper jaw and has no more than seven pairs of conical teeth in the lower jaw. Source.

A Risso’s dolphin named Pelorus Jack became famous for guiding boats across Cook’s Strait in New Zealand and sparked the first government protection for a cetacean after someone fired a rifle at the curious dolphin in 1904. Source.

This species has been known to hybridize with bottlenose dolphins in captivity and on occasion in the wild. Source.

This is the classic dolphin of Greek and Roman mythology. Source.

“Super pods” of up to 5,000 dolphins have been seen in the bay—a stunning site. Source.

Only about a third of a dolphin pod is visible, the other two thirds is under water. Source.

These dolphins are familiar companions to sailors of many seas. As fast-moving ships slice through the water, common dolphins surf alongside. Dolphins also use this hitchhiking trick with their own cousins: sometimes they ride on the waves of large whales. Source.

Scientists reveal that they can collect DNA from dolphins, whales and porpoises by collecting the blow, or exhalations, from the animals. Source.