Thank you to all of you for cleaning up your streets and for improving the natural habitats in your community. All of these groups were great at documenting their efforts and recording their results on the Clean Swell app. We really enjoyed reading about your summaries so here they are for the world to read! Enjoy 🙂

“We had a good day yesterday clearing weeds and brush at Calera Creek Park in Vallemar. We had at least five scouts and five parents. Steve, Jen and Bodhi Veilleux, Tristan Nguyen, Bill Burke, Oliver, Jay and Teenth Patel and Dan and Alex Beatty. With a few other parents dropping off and picking up kids. We got a lot of clearing done to release the ceanothus and trees that we planted a few years ago. We also planted a small redwood tree. And we cleaned up a little mini park on the other side of the creek.” -Group Leader Jeff Moroso

Last weekend we picked up 2,975 cigarette butts and 25lbs (Full DHL Bag) of garbage along with 8lbs recycling. It is a shame it is already a mess again! -Group Leader Jim Poket

Betty and I were at the Resource Center’s planter box with four members from our Garden club to give assistance with their wood chips and advice. I believe the members had already worked Thursday and Friday to spread them out so we worked on cleaning up the weeds around the planter box and we weeded the front steps and walkway up to the Portola statue to make it more presentable and appealing. That’s our Earth day for today. -Group Leaders Dan Wells & Betty of the Pacifica Garden Club

Thanks so much again for letting us participate in today’s beach clean up. I’ve been told by my colleagues that it was very rewarding. Hope to work with the Pacific Beach Coalition again soon. I’ve attached a few pictures. We collected well over 100 lbs of trash, 15+ lbs of recycling and even a large bag of compostables, not to mention 300+ cigarette butts. And that was from a beach area that most people said looked clean to start with!  It’s always so valuable to get all those small, dangerous items off the beach. –Linda Mar site captain Jim Fithian

We picked up on the 13th and 19th, post weekends at Gray Whale Cove are always good for a few sacks (frown).  Approx 50 lbs between us 4 volunteers. -Group Leader Jim Sullivan

In honor of Earth Day, The Pedro Point Community Association started a long-overdue refresh of the Firehouse’s outdoor areas. As is befitting of this strange year, we forgot to request advanced registration, so feel free to dismiss these stats.
Number of people – 15
Pounds of trash – 5
Pounds of recycle – 5
Number of cigarette butts – 20

We ended up mostly beating back a year of overgrowth and cleaning up the area to prepare the Firehouse as a safe space for members of the community to gather and play outdoors. Group Leader Cherie Chan

We are so grateful to the 4 H group that cleaned up  MR yesterday in a 2 hour storm.  They were great.  Over 1000 cigarette butts,  trash,  thistle slaying and started painting over the graffiti at the transfer station.  -Mussel Rock Site Captain Chris Burr

Today, 13 members of the local 4-H club joined Mussel Rock Stars (Julie, Chris, Joe, and Helen) for a cleanup in the

rain and wind; this was the second cleanup this year, which was also the second since February 2020. Undeterred by inclement weather, they managed to collect approximately 52lbs of trash, approximately 1000 cigarette butts, 2 plastic bottles and 15 cans-mostly from 4-H club members’ drinks at the cleanup (significantly, a few local people are picking up bottles and cans every day to get cash for it). Julie gave everyone some details about the San Andreas Fault and the nature of the bluffs to erode. Joe brought special sushi lunches for “staff” and put together the magnet, put up the PBC sign, and wiped clean the informational boards after using soapy water that Chris had provided. Chris provided drinks and snacks for us all.

Helen ran the magnet to pick up ferrous bottle caps, screws, and nails around the car park. Chris and Helen did habitat restoration, removing many large invasive thistles including roots, from near to the area where we host the cleanup. Two of the 4-H group joined Helen in graffiti abatement, painting over graffiti on the entire north side of the derelict Transfer Station, applying a gray exterior paint from one of many cans dumped on the sidewalk on Oceana Blvd, near to the animal hospital. Unfortunately, local graffiti taggers had decided to blitz the open space sign and structures in it, and paint all over the tarmac of the transfer station overnight, possibly because I had put out an appeal for paint to do graffiti abatement on NextDoor.com. I am not sure when my next graffiti abatement will be, but I won’t be mentioning it on NextDoor.com, it will be covert.

Later, Cynthia and Amelia of the PBC came to open the PBC cigarette blitz bucket and found 150 cigarettes. Also, Jeff, a regular at Mussel Rock was there planting a lot of succulents from his garden around the cypress trees I planted there last month. A man and his wife were sitting in their car and asked me what Cynthia and Amelia had been doing; I was proud to show my PBC sweatshirt and nonchalantly tell them we are part of a large group that recycles cigarette butts and cares for the environment, having run an Earth Day cleanup today at Mussel Rock. They thanked me! -Mussel Rock Site Captain Helen Nicely

The Friends of San Pedro Valley Park’s Weeding & Planting was a great success today at the park. 12 Hardy and energetic volunteers showed up, and with support from the Pacifica Land Trust and SMC Parks we got the job done!   Our event was from 10AM  to 1PM; however, most showed up by 9!! Native Plants were from the PLT Nursery, and we made great progress removing invasive weeds. So this year in spite of cancellations of our usual Earth Day events and Eco Fest, in which the Friends have participated over the past years with the San Mateo County Parks Foundation, we worked responsibly together …. good for the earth and good for us!!
Thanks to PBC and your celebration of Earth Month/Day, and all of you behind the scenes for continuing to be an inspiration for all of us! -Group Leader Sharron Walker from The Friends of San Pedro Valley Park

Thank you for the opportunity to honor Jonny and Stephanie with our clean up. We weren’t able to get there til this morning but it was really wonderful, as always.  I attached screenshots of the data we submitted and a picture for you! -Group Leader Mary Bier

Community Friday trash pickup in progress! The number of cigarette butts out there is out of control. I picked up 57! Did you know that cigarette filters are not only filled with toxins like nicotine, but they’re also made of plastic? Where I live, this junk ends up on the beaches and in the ocean. Working on the solution today! -Group Leader Dan Freeman

Just wanted to share a few pictures from our weeding on Palmetto this morning. We were lucky the city came by just as we were finishing up and took all of the green waste away for us. We all had a good time and needed some time out of the house. We filled 3 bags! -Rotary Weeding Group

We collected 79lbs of garbage from the Secret Waterfall today. I will add this to the Clean Swell app. We pulled a long length of rope out of the creek which accounted for some of the weight. It and other rubbish were actually damming the pool below the waterfall. So the water level is at least four inches lower now. 6 boys attended and all had fun. -Group Leader Oliver 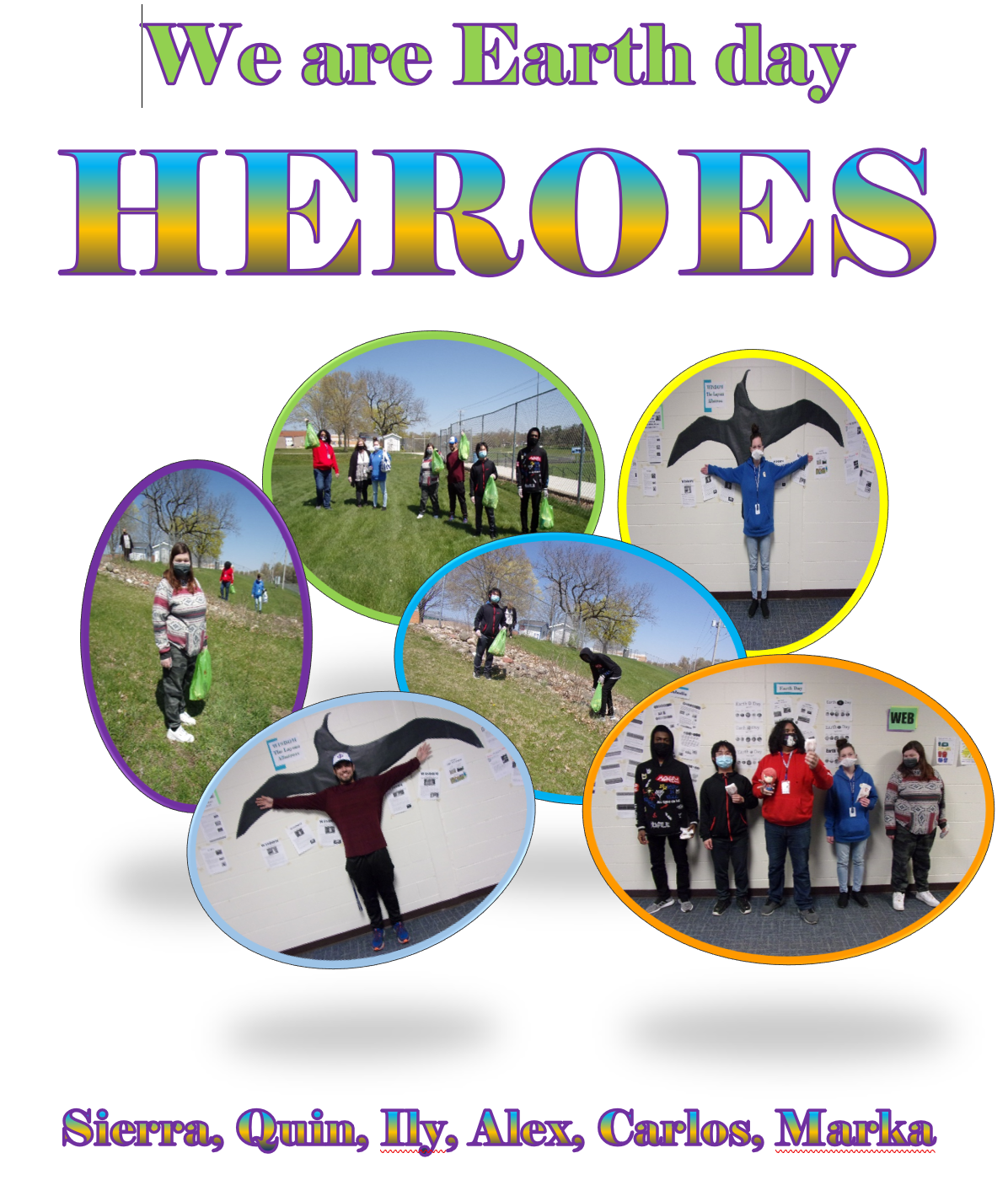 “The goal of Coast Week is for the students to have an appreciation and a sense of stewardship for our local coast and their backyard,” said Lauren Miller, Sea Crest Head of School. “We want students to recognize this awesome resource that we have in the Pacific Ocean.” -This is a snippet from the HMB review article that was written about the Ocean Week at Sea Crest School. More about this special week and our Albatross exhibit here.