1. They have no brain and no blood.
Starfish use filtered sea water to pump nutrients through their nervous system.

3. Starfish is not their right name, they should always be called Sea Star!
They’re actually related to sand dollars and sea urchins. They do not have gills, scales, or fins like fish do. So because they are not classified as fish, scientists prefer to call starfish “sea stars.”

4. There are around 2,000 species of sea star.
While many species live in tropical areas, you can also find sea stars in the cold waters of the Earth, even the polar regions.

5. They cannot survive in fresh water.

6. They can regenerate.
But its takes a while. It can take u to a year for a lost limb to grow back.

7. They eat inside out.
When they capture prey, they have tiny suction cups to grab ahold of their food. Then their stomach exits their mouth to digest the food, and reenters the body when they’re done eating. Learn more about their anatomy on our sea star web page. 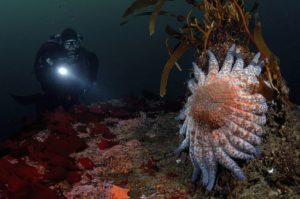 8. Sea Stars Reproduce Two Ways.
Male and female sea stars are hard to tell apart because they look identical. While many animal species reproduce by only one method, sea stars are a little different.

Sea stars can reproduce sexually. They do this by releasing sperm and eggs (called gametes) into the water. The sperm fertilizes the gametes and produces swimming larvae which eventually settle on the ocean floor, growing into adult sea stars.

Sea stars can also reproduce asexually through regeneration, such as when they lose an arm.

9. Brittle Stars are the Sea Stars’ cousins.
Brittle stars (Ophiuroidea) are a group of echinoderms that resemble starfish. There are about 1500 species of brittle stars alive today and most species inhabit marine habitats with depths greater than 1500 feet. There are a few species of shallow water brittle stars. These species live in the sand or mud just below the low tide mark. They often live amongst coral and sponges as well.

Brittle stars inhabit all the world’s oceans and live in a variety of climate regions including tropical, temperate and polar waters.