We used our new popup tent for the first time; I purchase such items with proceeds from recycling of cans, glass and plastic bottles, both picked up during cleanups and from my household collection. The tent was a big hit on such a gloriously sunny day. The spring flowers were abundant and attracted plenty of busy bumble bees.

While we were closing up for the day, we met two children, aged 5 and 7, with their grandmother and great aunt.  I offered them a Razor scooter each, which they eagerly adopted. Sadly, I learned later that they had recently been orphaned when their single mom died.

Young coyotes were spotted, guarded by their parents, in Mussel Rock Park. Also, I discovered a new favorite plant in the park. It is a hardy member of the pea family; it even grows in dry spots, on gravel! Its name is bird foot trefoil and it attracts bees with its abundant yellow flowers (see photo) and has a fragrance reminiscent of jasmine. Isn’t nature incredible? 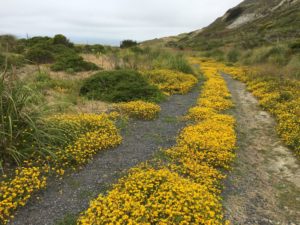