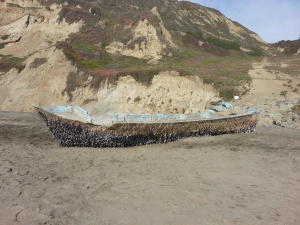 A fiberglass skiff possibly from Japan, which may or may not be from the 2011 tsunami disaster, recently washed ashore at Mussel Rock (near Avalon Canyon in Daly City) in August 2014. The site’s Adopt A Beach team discovered the skiff and went the extra mile to alert proper authorities to begin to identify and arrange for its removal. It is yet to be determined if the skiff displaying Japanese writing originates from the 2011 tsunami, though it is a similar risk coming from waters that allow foreign organisms (aquatic invasive species) to grow and then be transported to our fragile coastal environment.
It is the third boat to come to shore in California since 2011, and is an example of how the Pacific Beach Coalition and authorities are reacting as they would to any tsunami-related debris.  It was evaluated for radiation, although the risk is unlikely because the Fukoshima nuclear meltdown and subsequent leakage occurred after the tsunami spread debris far and wide.
It is expected the Japanese consulate will receive information on the findings to reach out to the government of Japan to try to identify an original owner and determine whether the boat was lost during the tsunami. ReadPacifica Tribune article here.

Pick Up Filters for Butt Blitz 2022