Make a Splash by Ending Trash at Mussel Rock!

A whale was breaching out at sea while three of us quietly set up our cleanup site. Little did we know how many people were about to suddenly arrive. Thus, my thanks to Joe Recto and Chris Burr who helped me get everyone registered. Pretty soon, we read the Dolphin pledge together and got to work in teams in record time.

The most unusual item found was a weed wacker. This was ironic as we continue to find exotic weed concoctions and accessories for weed use. Other unusual finds were new shoes and rubber boots, which went to 3 lucky cleanup volunteers.

Jeff and Paxton Christner found a large gray plastic tray, with pelagic goose-neck mussels attached (see photo). Hence, it appeared to have been at sea for a long time. As it also bore Japanese kanji lettering, it may have originally come from Japan. We added it to our list of other plastic items washed up on the rip rap where  waves crash at high tide, and then recede, leaving mostly fishing-related plastics. We have reported several items that were deemed possibly or definitely related to the earthquake and tsunami that struck Japan in March 2011.

Pacifica Public Works introduced themselves to us early on, and as promised, returned at the end of the cleanup to remove the shopping cart and fence posts found by Scout Troop 74 (see photo).

Julia Au, at California Coastal Commission, observed while we picked over the trash, separating out the various recyclable items. She took photos to put on their Twitter site. 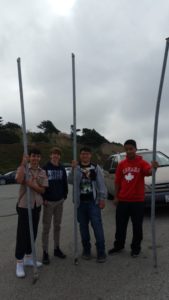 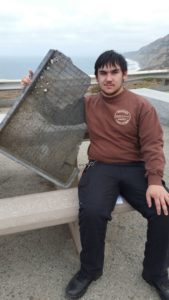