Why It Matters: In 2005-2006, building on the momentum from the huge wave of Southern California coastal cities restricting smoking on beaches, Pacific Beach Coalition member Susan Danielson-Senning led a successful smoke-free beaches campaign, making Pacifica the first community in Northern California to set this precedent. Unfortunately today, cigarette litter continues to be the #1 item polluting our coastal environment, and collected during our monthly cleanups.  It is estimated that several trillion cigarette butts are littered on our sidewalks, beaches, nature trails, gardens, and other public places worldwide every single day.

Cigarette filters are made of cellulose acetate tow (plastic), NOT COTTON, and they can take decades to degrade. Not only is cigarette litter unsightly, its toxic residue is damaging to the wildlife and our environment. Littered butts cause numerous fires every year, some of them fatal.  Wildlife mistakes them for food, and they are hazardous to youngsters playing on the beach. Others have followed our lead. After Pacifica’s ordinance passed in June 2006, the County of San Mateo as well as the City of Santa Cruz followed by banning smoking in parks and beaches under county jurisdiction (2007), and banning smoking on Santa Cruz’s world-famous pier and beaches (2009). 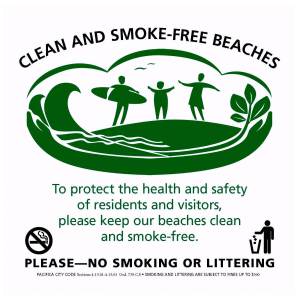 What You Can Do: